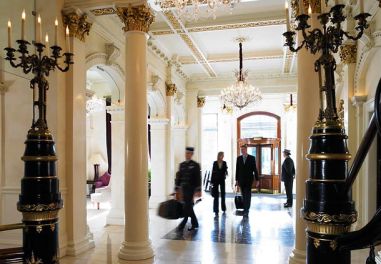 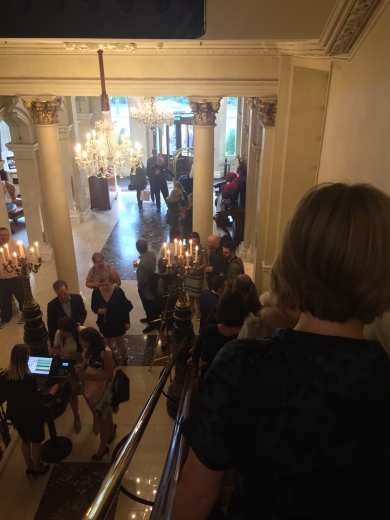 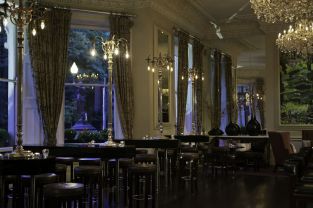 There are rare occasions when I can tick off a life goal, and foodie goals are just as important. As a Dubliner, I have always wanted to visit The Shelbourne, A Renaissance Hotel, in the heart of my fair city, on the corner of the wonderful St. Stephen’s Green. Not only is this one of Ireland’s most opulent hotels, but it also has stood through the wars, notably the Easter Rising in 1916, (in which my great grand uncle Joseph Plunkett fought, and was a signatory leader of the Irish Proclamation), when it was occupied by British troops to counter the Irish Citizen Army and Volunteers. Today, this 200-year-old hotel is now host to luxurious rooms & suites, exquisite food, Afternoon Tea and evening drinks, popular among the young & old, professionals and tourists alike. Being on my Eat List, I’m delighted to have been invited by TheTaste.ie* for an evening of wine tasting and fine dining, spanning six courses, in very good company – and I brought my auntie along too!

We were greeted and shown to the upstairs Adams Suite for a champagne reception with canapés, and also a brief introductory speech by Kirsty Loftus of Ramón Bilbao Wines, the winemakers who would be treating us to their drinks that evening. We then returned to The Saddle Restaurant on the ground floor,  with both separated booths and spacious open room dining tables, and were seated at the top table. From the well laid table to the fireplace and room decor, this was already ticking all the boxes of what I’d imagined dining at The Shelbourne would be like. The first course was the Chilled Tomato Consummé, which was refreshing, light and flavoursome, with plenty of basil notes and fresh tomato – a great way to start the meal.

Next was the House Cured Castletownbere Salmon, and this was easily one of my favourite dishes. Very fresh, it had a great contrast of flavours with the crab & salmon plentiful, and I feel that the natural yogurt really binds it altogether. This dish was well accompanied by Mar de Frades, Brut Nature, that was fruity with hint of citrus.

Next we were treated to the delectable Torchon of Foie Gras, which featured a fluffy light brioche with good crust, that worked beautifully with the paté, that had earthy notes but was meaty without being overpowering. It was well complimented by the onion marmalade, a classic combination that did not disappoint. The sweetness of the brioche with the pâté is well paired, although the sharpness of Mar de Frades, Albariño wine cuts through it well too. 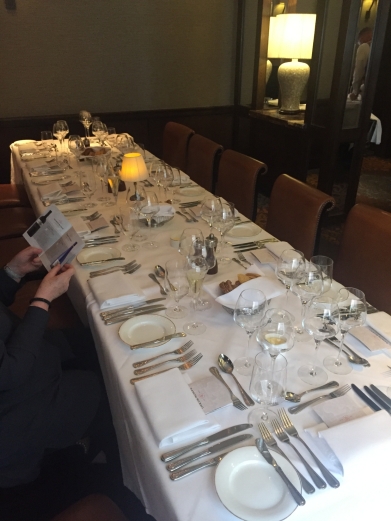 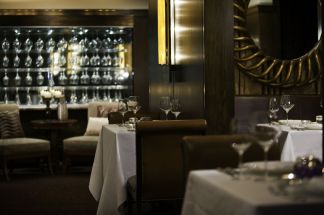 The fourth course was easily my favourite dish of the whole dinner. The Braised Short Rib of Sheelin Beef was delicious in flavour and the meat just fell apart and melted in the mouth. It well complimented with fresh potatoes, celeriac to add texture and a deep jus. There was also great depth to the Cruz de Alba, Crianza, DO Ribera del Duero wine, which was strong in red grape and berry hints, and perfectly matched with the meat.

The next course was the savoury of the desserts; Bellingham Blue Cheese. Soaked in Ramón Bilbao, Reserva, DO Rioja for 4 days, the cheese wasn’t too strong (which is good; I’m not a usually blue cheese fan nor eater!), and was perfectly served with crisp crackers, some with hazelnuts & seeds, others with fruit & seeds and fresh though dried celery strips. What I did enjoy was that this cheese came from Castlebellingham, which is the next village from Annagassan, the latter of which was my hometown every summer when I was a kid. The same wine in which the cheese had been soaked with was also served for this course, and was strong but not overpowering, having a good balance and was fruity in flavour.

Finally, to finish the dinner off, was the sweet dessert, amply titled the Chocolate Dome. The dome consisted of a salted caramel & chocolate mousse with a raspberry insert, covered in liquid chocolate, it featured a croquant sprinkled border, dusted with edible gold, served atop chocolate sauce and fresh fruit. And boy was it as divine as it looked, so much so I didn’t stop to take a photo of the inside! The layers were impressive and all the right flavours merged together in each bite, well complimented by the Ramón Bilbao, Mirto, DO Rioja.

We were treated to petit four afterwards, with offerings of more wine and had great chats at our table about the feast we just devoured. Overall this experience was just magical, and I must admit the company, the food, the wine and the service were all excellently on par with one another. I would highly recommend dining at The Saddle Restaurant, and I look forward to my next dining experience here. Later, myself and a few of the group returned to the No.27 Bar & Lounge for a nightcap, (in which the service is also brilliant), before I set off home. The Ramón Bilbao wines were all excellent, and I too recommend picking up a bottle or two of any mentioned.

A big THANK YOU TO Jules & Keith Mahon of TheTaste.ie FOR THE INVITE AND COORDINATION, AND TO Kirsty Loftus of Ramón Bilbao Wines FOR THEIR wonderful wine, AND TO The Chefs & STAFF AT THE Saddle Restaurant FOR THE delicious cuisine & excellent service! 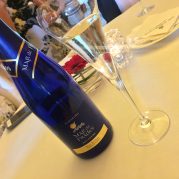 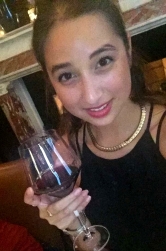 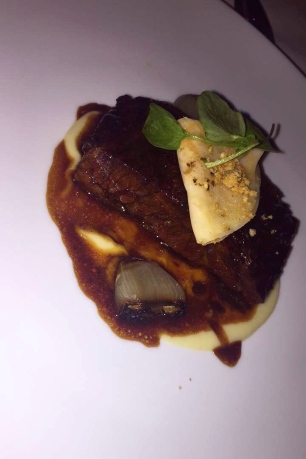 *I did attend as a non-paying guest for this experience, but that does not influence the authenticity of this review. 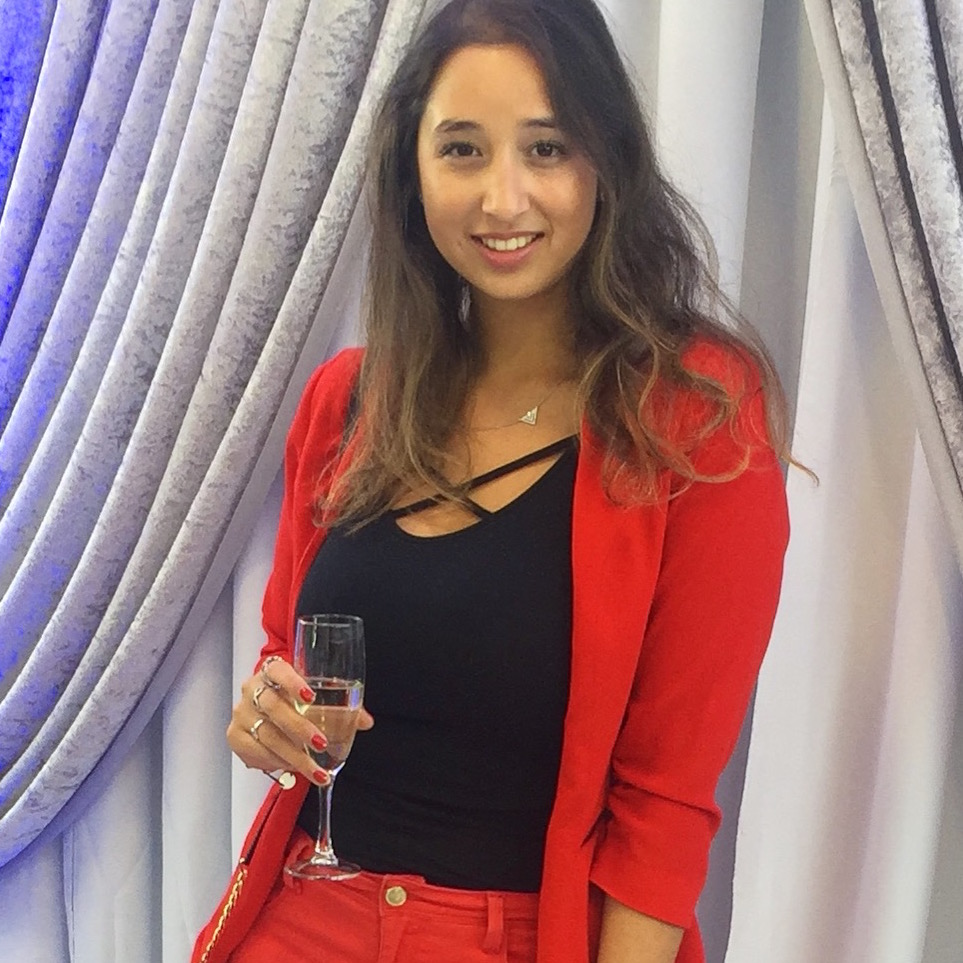 Disclaimer: All featured reviews or posts that are sponsored or organised by PR/marketing companies are marked with an *asterisk
Join 48 other subscribers