On Wednesday evening (May 18), I attended a lovely event to relaunch Oscars Bar & Kitchen, Merrion Street. Organised by Fiona Reid of Irish Bloggers Association & Cool Events, the evening promised a 7-course tasting menu as this eatery launches a brand new selection of foods and drinks. On arrival we were greeted with the Beer Cocktail, a concoction of a light beer and lime, which I surprisingly enjoyed as I’m not a beer drinker. The first sharing plate was the Quail Scotch Egg; a crispy breadcrumb outer with soft & well-seasoned pork inside and a quail egg within. I will note the egg wasn’t as runny as I expect a scotch egg to be, but the flavours worked very well. There was quite a wait in between the first & second course, however the presentation of the Black Pudding dish made up for it; served in a flat dish with a lid, broken up pieces of crispy & soft black pudding, thin apple slices, mini cauliflower florets on a bed of onions & capers. I’m not a fan of black budding but I did enjoy this dish, and the combination of flavours with the other ingredients was tasty, albeit a slight too salty for my palette.

Next were the Baby Back Ribs, which were a sharing plate, and the most delicious dish of the day! Barbecued fall-off-the-bone pork meat, slightly charred and covered in a delicious Bulleit Bourbon BBQ sauce that was slightly sweet, slightly spicy and plentiful. I absolutely adored this course, and it was a collective agreement that the ribs were the favourite. Our chef & waiter were also kind enough to send out an extra plate of ribs for our table! The next dish was the Lamb; two thin pieces of crispy fried lamb breast, served on a bed of Bulgar wheat with a slice of grilled aubergine, a yogurt whip and sprinkled with pistachio dust. I don’t eat lamb so I shared it between the two lads, however I did eat the Bulgar, aubergine & yogurt, which were a delightful combination.

I was looking forward to the next course, which was the Smoked Salmon BLT. A sandwich made up of fresh smoked salmon, crispy bacon, lettuce and tomato slices, with a twist of a caper white sauce in between grill-toasted sourdough bread that our waiter described as “heaven in between two slices of bread”. And boy was he right! Everything was fresh and worked beautifully together, and the salmon & bacon combination was a delicious surprise. There was also a vegetarian alternative of Whipped Feta & Roast Pear, that was served with a pistachio dust. This was a lovely sweet but savoury dish that I happily devoured!

Next up we were served a sharing plate of the Flank Steak & Chips; long chargrilled beef steak strips cooked medium-rare, with a sultana & walnut side salad, Bernaise sauce and hand cut rustic chips. The steak was delicious, well seasoned with plenty of flavour and delicious with the steak & salad. The sauce was nice though too thick to pour, and though we were more than delighted to receive a second helping of the flank steak, this second batch was much more rare than before and unfortunately not as enjoyable.

To finish our night, it was time for the dessert course of Rhubarb Pannacotta. Little lots of panna cotta with rhubarb compote, ginger spice biscuit crumble and basil leaves on top. Panna cotta is one of my all-time favourite desserts, however I was a tad disappointed as the texture of this dessert was more creme brûlée like. It was too creamy and not set enough for a classic panna cotta. However, the rhubarb & vanilla cream flavours were beautiful together, especially with the crumble on top.

Each course was also served with an accompanying drink: Beer Cocktail to start; followed by Costa Cruz Tempranillo Shiraz red wine for the black pudding; the Galway Hooker IPA with the ribs; Zagalia Pinot Grigio white wine for the lamb; the Hop House Lager with the salmon; followed by De Martino Cabernet Sauvignon red wine with the steak; and a sweet Dessert Wine to finish. There was also a Teeling Single Grain Whiskey to end the evening, though I didn’t opt for this myself. All of the drinks accompanied their dish well, though my personal favourites were the Beer Cocktail as it was rather light & refreshing and the white wine, though I would have preferred it with the salmon than the lamb dish.

The staff at Oscars Bar & Kitchen were extremely attentive and our main waiter, Danny, was excellent. He catered to our table’s dietary needs and requests (lactose intolerance, allergies), as well as informing us of the ingredients of each dish, and the techniques behind them. He even told me the legendary story behind the Chinese teacup – I never knew about the princess & the peasant and their forbidden love!

THANK YOU TO Fiona Reid FOR THE INVITE AND organisation, AND TO Danny, the STAFF & chefs AT Oscars Bar & Kitchen FOR all of the food and drink! 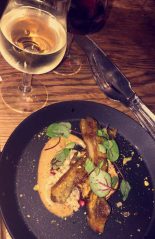 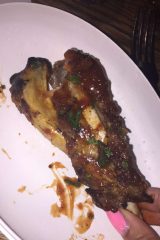 *I did attend as a non-paying guest for this experience, but that does not influence the authenticity of this review.

Disclaimer: All featured reviews or posts that are sponsored or organised by PR/marketing companies are marked with an *asterisk